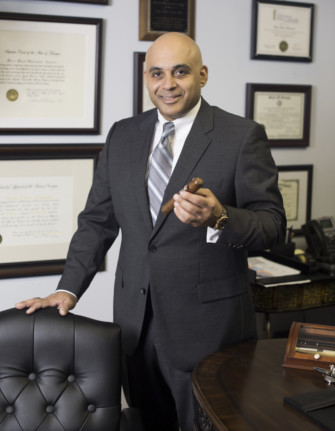 Musa M. Ghanayem, attended University of Wisconsin Milwaukee where he majored in Criminal Justice and Philosophy. After college Musa attended Law School at Michigan State University College of Law, where he was a Dean's List member every semester, and a Cum Laude graduate. Musa was also a member of the Michigan State University School of Law, Moot Court Board where was awarded the honor of, "Best Oralist," and was selected to represent The College of Law in a National Competition. Musa is licensed to practice in Georgia and New York and has been involved in a variety of areas of Legal Practice.

As a 1st year associate Musa was a senior associate in a complex commercial litigation and Qui Tam boutique law firm. After two years as an associate, he realized his passion as an advocate for civil rights, human rights, and the protection of the Constitution. In 2002 Musa joined the office of the Fulton County Public Defender, excelling quickly and earning the award for "Employee of The Quarter."

Musa was later appointed as an Assistant District Attorney where he prosecuted all felony cases ranging from possession of Drugs to Murder, Musa was then appointed to the High Intensity Drug Trafficking Area Team (H.I.D.T.A.), which is a joint State and Federal program to prosecute major drug crimes.

In 2007 Musa Started his own practice and is in 2012 became a founding member of Ghanayem & Rayasam, LLC. Musa has handled many high profile cases, which were profiled on Dateline NBC, CNN, New York Times, New York Post, The Atlanta Journal Constitution and many other media sources. Musa has received national recognition for his representation of Sheriff Victor Hill and the ultimate acquittal of the Sheriff on all alleged counts of the indictment.

Musa focuses his practice on Criminal Defense, Political Advisory, and Civil Rights. Musa has represented politicians, elected officials, musicians, and many other High Profile Cases. Musa serves as the Legal Adviser for two 501(c) 3, Non-for-Profit organizations, and sits on the board of both.

Musa was born and raised in Milwaukee, Wisconsin and still proudly roots for The Green Bay Packers.